If you are interested in off-grid living and want to spend less money than you would for an RV then you might want to consider this option. Some of these home can be quite fancy or as rugged as you want. Steel shipping containers are the temporary homes of countless consumer items being transported all around the world. Items are packed into the cargo containers in their country of origin, then shipped to wherever they’re destined to be sold. Once they’re emptied at the appropriate port, many of these cargo containers simply sit around empty or get melted down for re-use. But recently, they’ve found new lives as homes and other types of buildings.

Perhaps the two most appealing aspects of building with shipping containers are the affordability and the green construction factor: shipping container homes are far less expensive than new-material traditional homes, and reusing them rather than melting them down significantly reduces the carbon footprint of the steel containers. Shipping container homes have been constructed in London, Scotland, Amsterdam Canada and New Zealand, and the eco-friendly trend has recently caught on in the U.S. The steel cargo containers are nearly indestructible, and provide a frame that is mold, fire and termite-proof and structurally superior to wood framing.

What’s more, the containers can be found in every port in the world. Eighteen million ISO containers are manufactured to specifications from the International Organization for Standardization and are used worldwide to transport products on ships. Once the containers are unloaded at docks they are typically left there, since it’s expensive to ship them back to their point of launch. In 2006 alone, the U.S. acquired 7.5 million shipping containers from China and returned just 3.5 million. The leftover 9,000 ton steel containers typically get melted down, which takes 1,000 kilowatt hours of energy per pound. 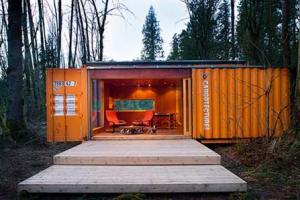 Steel shipping containers as a construction material are practical and affordable, and a superior solution to 2012 alignment for shelter. The benefits of building with shipping containers are numerous but at the top of the list are: structural superiority, affordability, durability, aesthetics that subscribe to our contemporary era, and the ease by which prefabricated buildings can be created with containers and then moved about. In general, traditional construction is too slow, too expensive, too wasteful and too antiquated.

Container-based homes are usually constructed at a cost of about 60% to 70% of a traditional home. Depending upon the location, construction times can be as little as two weeks for a smaller prefabricated structures, or six to eight months for larger residential projects. And these buildings have a lifespan that far exceeds traditional construction. By recycling shipping containers we gain the benefits of working with steel without contributing to any adverse environmental impact from the production of new steel. 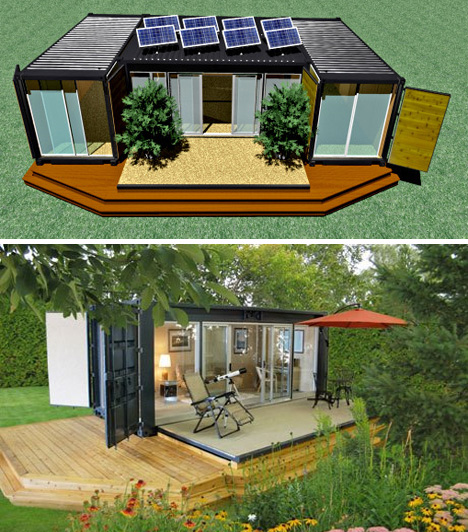 Ecopods claim to not only be thinking outside the box; they’re re-inventing the box. These small, eco-friendly structures are designed to be used as add-ons or temporary use buildings, such as guest bedrooms or home offices. But it’s easy to imagine using it as a primary residence, as long as you don’t mind living in a small space. The cargo container buildings are designed to be off-grid and as ecologically sound as possible, incorporating recycled and recyclable material. The pods can be moved just about anywhere with ease, and the hydraulic-powered deck/door is designed to keep the structure very secure when it’s not in use. 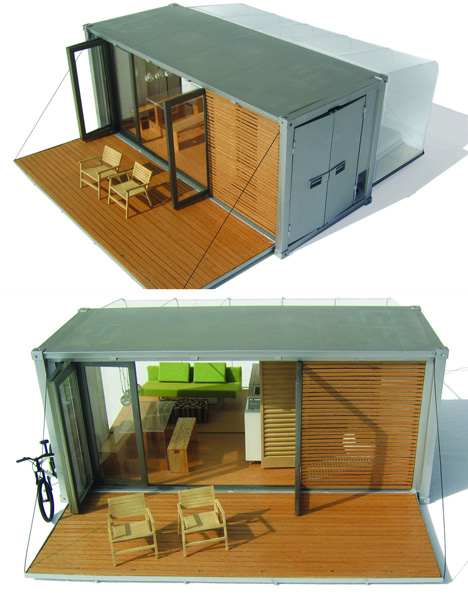 Canadian group BARK Collective wanted to show the world what great Canadian design is all about. They came up with a remarkable cabin that can be packed up and shipped on a train, a truck, a ship, an airplane or a helicopter while being unrecognizable as anything other than a shipping container. But once at its destination, it opens up into a comfortable, if rather small, living environment. There are accommodations for a family of four and one pet to live off the grid in style. Now that is truly AWESOME! Barbara Andrews.